More leaks about the camera of the coming iPhone 6s and iPhone 6s plus is out. As I've already reported before will the iPhone 6s feature 12 megapixel camera, and now some leaked schematics from a Foxconn employee “proves” that. The photos has now been removed from the Weibo account. 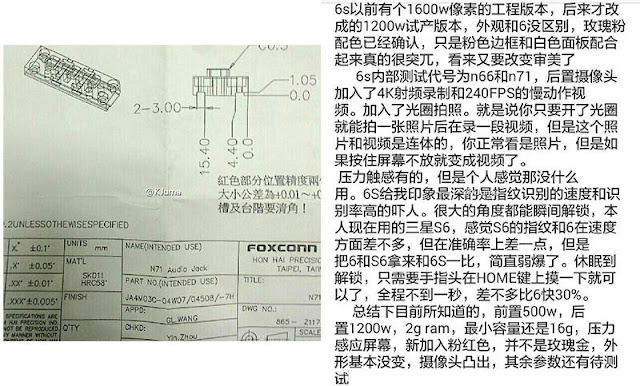 The camera module will support 4K video, and slow-motion footage at 240 frames per second.

The new model numbers are N66 for iPhone 6s and N71 for iPhone 6s Plus, and as earlier rumors has said will both phones have 2GB of RAM, 5 megapixel front camera, and LTE Category 6 modem for very fast speeds and more power efficient for better battery life.

And the Taiwanese source also says that the iPhone 6s will come with a pink color option and not rose gold as earlier rumors has said.

Here is a video about the 12 megapixel camera on the iPhone 6s: