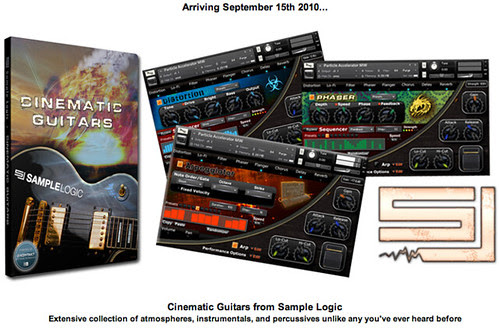 Here is a Press-release:

Extensive collection of atmospheres, instrumentals, and percussives unlike any you've ever heard before

This time last year, Sample Logic was on the verge of announcing Morphestra – an epic collection of over 1100 instruments and multis pre-installed on a Glyph hard drive. This huge cinematic virtual instrument went on to receive scores of rave reviews and awards, not to mention critical acclaim from the world’s soundtrack professionals.

It will therefore probably come as no surprise that we are incredibly excited to announce a new epic release from Sample Logic that will knock the socks off tv, film, game and electronic composers all over again…

Cinematic Guitars is a powerful collection of morphed guitar instruments harnessed in a remarkably adaptable “core effects sequencer” engine powered by the Native Instruments Kontakt Player. Derived entirely from true electric and acoustic guitar recordings by guitar guru Steve Ouimette (known for his work on the Guitar Hero franchise) this library is not a traditional guitar sample library, rather, it is an extensive collection of atmospheres, instrumentals, and percussives unlike any ever heard before.

Taking it one step further, Cinematic Guitars gives users the power to create and manipulate custom instruments using the first ever "core effects sequencer" designed by Sample Logic and built into the Kontakt engine.

This library is all encompassing, exploring infinite timbres and emotions through its unprecedented collection of over 1,000 instruments and multis, starting with bizarre, dark, euphoric, spiritual, electronic sounds and going far beyond.