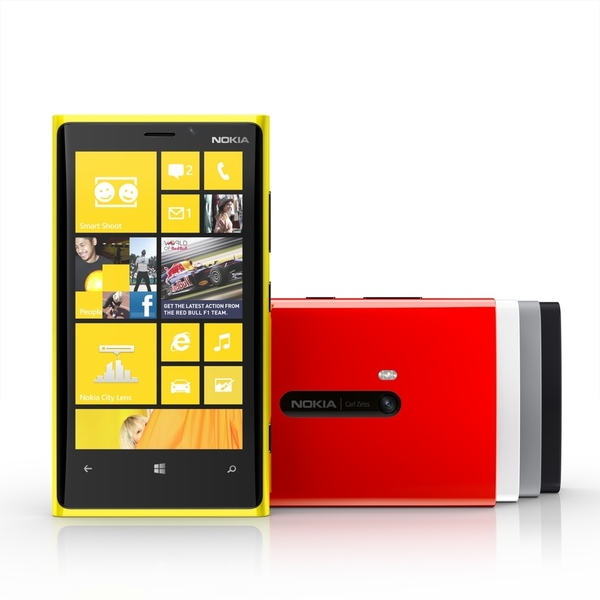 it has a gorgeous 4.5-inch display, a fast dual-core processor, and a number of improvements in the software and hardware across the board

Nokia has unveiled the Nokia Lumia 920 Pureview Windows 8 phone. It has 8 megapixel PureView camera, dual-core SnapDragon CPU, 4.5-inch Curved screen and great battery life. I think it looks really great. What do you think? Tell me in the comments.

"It does. Wireless charging. yup.
And it doesn't look like an iPhone. Nokia followed its own path. Good job.﻿"

"I love how much care was put into this phone. They really worked hard to make a compelling product. It looks like it has great build quality, beautiful screen, best in class camera, snappy UI, great maps, a huge battery, LTE, the best chip on a smartphone (S4) and wireless charging. I have major lust for the 920.﻿"

"I like what I've seen so far. The industrial design is top-notch, as you'd expect from Nokia. Also, I second the vote for wireless charging. The lens on the camera sounds cool, but I'd like to see it in action before saying anything more. Note to Samsung: this is how to innovate in the smartphone market.﻿"

"And yet NOK is taking a beating, currently trading down ~8%. WTF?﻿"

"OMG The curved glass is back!﻿"

"Finally a decent upgrade to the Palm Pre.﻿"

"Nokia are really going their own way. I like that. No copycats like some other manufacturer that I won't be call by name ;)﻿"

"the only thing it miss is apps. I think that will take speed when WIndows 8 is released in October though.﻿"

"I was very disappointed when the 900 went to a flat screen. I really loved the feel of the 800's curved glass. Nokia isn't messing around here. They've gone and thrown the kitchen sink at everyone!﻿"

"If they don't follow that price, they won't be competitive with SGS3 and iPhone 5. They can't be that stupid. They'll save money by not using quad-core, and not paying for dumb ass law suits.﻿"

"Pretty good hardware it seems (in theory I like the wireless charger) , but from my perspective there is nothing that would tempt me to switch to a platform that it desperately trying to survive from huge mistakes in the past. If they are still around in two years I may think again.﻿"

"They should do like Apple are doing, release it immediately after, or say a date when it will be released."

"They definitely will, this is both a comeback by Microsoft and Nokia. I think Microsoft is cool again, They are doing something really exciting here by releasing an OS that uses the same kernel on all devices (even computers), so that the developers easily can release the same app for all devices, phones, tablets and computers. Really smart. This will crush android. http://www.theverge.com/2012/9/4/3291249/the-end-of-android-tablets-google-amazon-kindle-fire-microsoft-windows-8﻿"

" I am not sure developers releasing the same app across devices is a smart idea, but the restrictions on UI and skins will definitely kill fragmentation. Unfortunately on the desktop front, Microsoft has created fragmentation from Day 1 in having Win 8 and RT. Imagine a person walks into a store and wants a Windows tablet. How do you tell them the difference between Windows 8 and RT?﻿"

"Of course not exactly the same app because of different screen sizes (most of Android apps is made for smartphones but works on tablets too... albeit very ugly), but they can very easily change it so it fits all different devices. ﻿"

" I wish it were so, but let's wait and see, Redmond may just surprise us. My CTO thinks it will be hell integrating across the devices which is why we're developing for iOS first, then Windows. We're giving Android a skip first because it really is a mess on the tablet front.﻿"

"I had a great discussion on one of my posts a couple of weeks ago, with some great windows 8 developers, and they say that it is like this. They have got awesome tools to port their apps to all devices. It's even really easy.﻿"

" I sincerely hope so and I look forward to trying it out after we launch on iOS. I know MS cares greatly about the devs"

"Time will tell... Some of us don't use Windows on ANY of our existing devices which makes this less than exciting. I'm hardly the average person and probably not target, so YMMV. MS has been talking "one platform" since the dawn of time, but never delivered.﻿"

"Do you need to feel very different when you upgrade from one BMW to another? I see the smartphone industry moving to be like the car industry at some point. All the innovations you see now are the result of early growth. Sooner or later, the patents will not matter and it will come down to design, supply chain management, and market segmentation."

"Well, both my personal experience (which is a bit aged) and what I can tell from friends, family and colleagues does note tempt me very much so far. Pigs may fly, but I'll need a fair number of months to be convinced before I take a leap of faith.﻿"

"I really hope both Nokia and Microsoft will succeed with this. They are worth it.﻿"