Could the Samsung Galaxy Note 3 look like this? This is a Chinese KnockOff of it 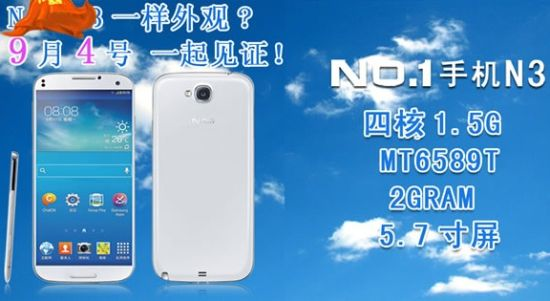 Could the coming Samsung Galaxy Note 3 look like this? This is a Chinese KnockOff of the Note 3 called N3, and knockoffs means unauthorized copy of a product. This knockoff will be released on the same day, September 4, as Samsung will present the new Note 3… Interesting!


Chinese knockoff manufacturer known as “No.1″ has recently unveiled its greatest, upcoming smartphone called the N3. Now, I know what you may be thinking. “How is this relevant to the Note 3″? Well, to begin with, the No.1 N3 is supposed to be a Note 3 knockoff which, interestingly enough, will hit the market on September 4th – the same date on which the official Note 3 is expected to be unveiled at IFA in Berlin.