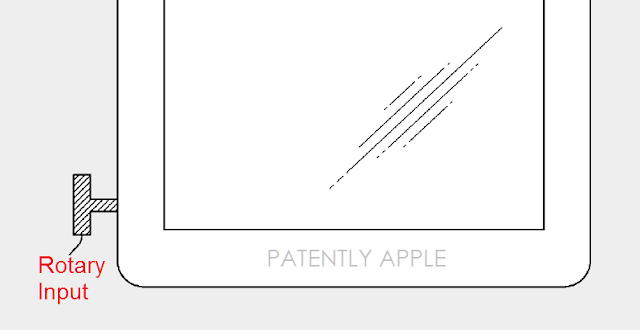 It seems like Apple is working on removing as many buttons as possible from their devices.

Today, the U.S. Patent and Trademark Office published a patent application from Apple that reveals that Jony Ive and his team have considered expanding the Apple Watch’s digital crown to other iOS devices such as the iPad. Apple notes that the digital crown could be used as a volume controller or locking the touch screen, turning on the touch screen, taking a picture, resizing text and other actions.

To me, that actually makes sense, because then they can replace the volume rocker (volume up and down) and the power on/sleep button into just one scrollable button. So it means that the device would get one less button, but one more function (up, down, press in, scroll).

It would also mean that the iPhone could be completely bezel-free, and you don’t have to touch the display as often anymore. Because you can, for example, scroll the text on screen with the digital crown button mechanism, or zoom the text in and out. So no more dirty screens then. You could also use the new button to take a picture with, exactly as you can today with the old volume rocker.

Here is a video about Apple is also removing the home button: