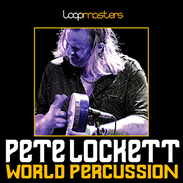 Another press-release I've got was this about Pete Lockett World Percussion Sample Pack from Loopmasters:
So this week Loopmasters have released a very special sample pack recorded by session percussionist Pete Lockett. As one of the most respected of his breed in Hollywood, he has worked on some of the biggest films over the past few years, including the last 5 Bond movies, Moulin Rouge and Snatch. Add this to his work with artists such as Peter Gabriel, Bjork and Amy Winehouse and you can begin to appreciate his talents as a percussionist.
The sample pack contains almost 1GB of grooves & loops ranging from 70 - 170 BPM along with one shot samples from a wide range of Indian, Arabic, Asian and Latin instruments.

This sample pack is a detailed glimpse into the world of session percussionist Pete Lockett. Pete has laid down grooves for the stars, including Peter Gabriel, Jeff Beck, Bjork, Amy Winehouse, Texas, Robert Plant, Damien Rice, Pet shop boys and many more. He also arranged and recorded all the ethnic percussion on the last five Bond 007 movies