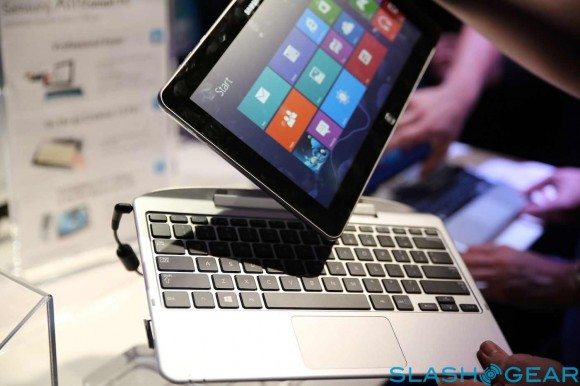 If each tech show has an unofficial theme, then IFA 2012‘s must be Windows 8 tablets. Microsoft’s new OS – in both full 8 and pared-back RT forms – has shown up on touchscreen hardware from all of the main manufacturers, each trying slightly different combinations of size, specs and accessories

"I'll admit to badly, badly wanting to bootcamp an MBA with W8 and then sticking one of those touchscreens you can put on a Mac onto it. Just because :p﻿"

" I don't get it why you need to take the screen off.. The 11-inch MBA is almost as light and small as the iPad.. With a keyboard. So much more powerful and easier to work with a keyboard"

"The MBA is a genius idea, especially with the wise adoption of the HD3/4000 graphics chips. You can run freaking CRYSIS on on the 4000, on medium or so settings; give it a few more years and there won't be much you can't run on an MBA"

"Plus eventually SSDs will get widespread enough that they'll have the price/size issue beaten. The biggest SSD I know of is the 960-gb one in the Modbook Pro; I'm sure that's ungodly expensive, but I think Apple is going towards all SSDs, albeit slowly. Most of the others will follow"

"The new Retina MacBook Pro has up to 768GB SSD. And yes, of course Apple are going all SSD. There is only the older MacBook Pro's left and iMacs that doesn't have SSD now"

"I think next year we'll see a Retina iMac and Cinema/Thunderbolt display; Apple seems to be releasing Retina six inches at a time or so"