I think the hassle with updating Android Phones to latest OS version is the biggest drawback for Android - Here's People's Voice! 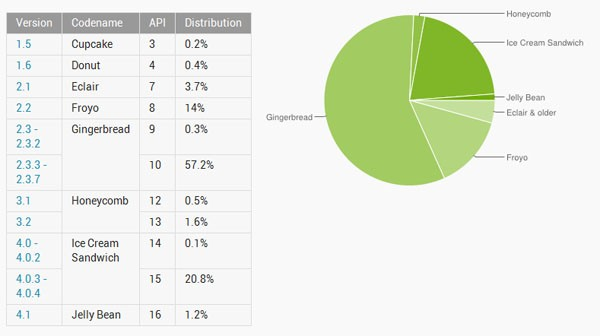 Last month was the first time Jelly Bean poked its head up in the Android distribution charts, debuting at 0.8 percent. It's bumped that stat by a significant proportion, if not a crazy absolute amount, to 1.2 percent of smartphones and tablets using Google's OS

"yeah same here. If I will buy an android phone it must be a Nexus phone."

"It sure is confusing with all the versions. And all the models! All these choices the poor consumers have to face. I like Apple’s approach better. One or two models and an OS that is pretty much unchanged since 2007. Much easier! ;)"

"I agree - to some extent. A lot of people dont really care - they have no idea what OS their phone is running - they are just happy that it does what it is supposed to. It is the price of choice. Just like you still find windows PC’s that run XP, Vista or 7 … as long as it works for the user, is it really such a big deal."

"Only solution is root or nexus."

"Totally agree. Stock Android is the future. Have to watch for the output from these graphs tho’ as there are an awful lot of 2.3 devices produced very cheaply in China, this can sway the perceived “adoption” rate some what."

"I actually think the whole “fragmentation” thing is pretty overblown. If you buy a device now that runs Gingerbread, it’s probably a lower end device and you don’t care what version of android it runs. And there’s very little difference between ICS and JB. They’re both very capable of doing anything that android can do."

"I think it’s a big deal for the ordinary consumer if they for example have a tablet and a phone, then it’s much easier if all look the same on both devices."

"That all depends on the skin too. You could have an HTC One X and a Galaxy Tab both running ICS, but they both don’t look the same."

"I agree. Disappointing for sure. But it comes with the territory. Choice creates fragmentation no matter how you slice it. Really it comes down to two choices: Latest and longest update schedule - nexus device. Some hardware design/feature or software feature - manufacturer of said feature/design."

"Another bad thing for Android is that people are comparing cheap Android phones to iPhone."

"For most people, it’s the price they care about. I have iPhones since 3G, and I must admit I’ve spent a lot on it, more than I would’ve wanted to. On the other hand, I wouldn’t want any other phone :) So I had to just bite it and accept the higher premium."

"Good point. When I updated my Note to the latest OS — it was a Samsung OTA and not an AT&T OTA.And when doing the upgrade I had a number of issues. Specifically with Kies. A rather useless application. Why — because I use Google Play to manage my content. And I am making the assumption that most Android customers do the same. So why would I add additional complexity to my content consumption by using another application to manage my content. I understand Samsung’s reasoning — but Kies is just poorly executed and is dwarfed by Google Play.In all honesty, OS updates should come from Google, only. So back to my update issue :-) Those upgrade issues should not be issues. It leads to terrible customer experience. And this is where iOS upgrades shine — although I really don’t like iTunes :-)"

"You don’t need iTunes to do iOS updates. It’s all OTA. Has been so the last year.."

Not me either. Haven’t used iTunes in a year. No need.

"I don’t mind having lots of options. The early 20th century Ford model that Apple is using is not my cup of tea."

"By the way, my Sony Ericsson Xperia ray is a cakewalk to update. Went from Gingerbread to ICS in under 30 minutes (including removing some bloatware)."

"My friend has a Galaxy Nexus and he´s a little upset because he never gets his update. He says that it’s something to do with the nordic build of JB…

Why is there different builds of the OS? Because you change language on android right???

Many android fans says that nothing new comes to iOS, but what was the big news between ICS and JB? Except Project Butter?"

"I don't think the GNex has JB if you got it with Verizon. Could be wrong though."

"I will say my unlocked Galaxy Nexus was bought through Google and the JB update was available within minutes of turning on the device in the US.﻿"

"iOS doesn't have those upgrade issues because it only has two devices to upgrade....iPhone and iPad. And the older iOS devices ARE fragmented just like how Android is, no matter how Apple tries to spin it. The fact that Siri can't run on an iPhone 4 makes it fragmented. Apple can call it "iOS 5" all they want, but all the features aren't there on the older models.﻿"

"I have a Samsung Galaxy S3 and I have Android 4.0.3 and I'll say it's not a big deal anymore if you don't get latest Android version at the same time it is released. From Android 4.0 (ICS) the OS is mature and good looking enough that this became sort of a non issue I'd say. As for touchwiz, sense etc goes there's a lot of launchers that make your phone look pretty much vanilla I'd doubt that most people couldn't tell the difference.﻿"

"Yes, some fragmentation is present on iOS. But Apple runs a much tighter ship in regards to older hardware getting upgrades. They seem to care whereas the ever increasing gaps in Android versions and devices running on said newer versions continues to grow.﻿"