Motorola has unveiled three new Droid RAZR phones - what do people think about them? 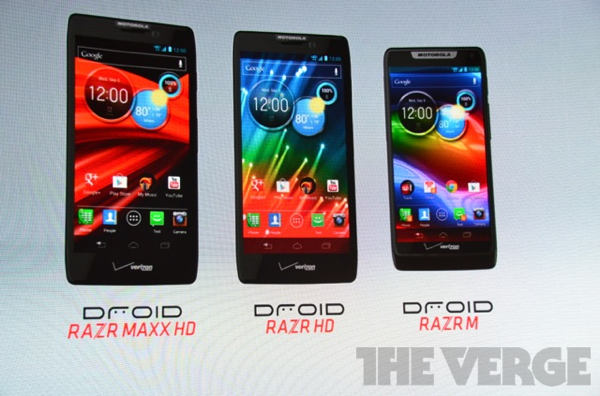 Motorola's new Droid RAZR lineup: how all three handsets fare against the competition | The Verge

The new Motorola Droid Razr M looks pretty nice, and it's available now with Jelly Bean. I think their skinning is much more "light" than the others. Almost Vanilla. What do you think of the new phone(s)?

"I'm leaning more towards the RAZR Maxx, with its huge battery. Battery life is my biggest complaint with today's smartphones and this promises a day or more of heavy use.﻿"

"Yeah but is so fat. I think the Razr HD looks slim and really nice﻿"

"Motorola are a bunch of idiots and hasn't learned there lesson. This keynote is horrible, these morons are releasing the cheaper model before there high end flagship model, they're not giving any release dates or price on anything. Sorry Motorola but don't call it a comeback ﻿"

"Its only $99 on contract from Verizon, available for preorder 5 o'clock EST today, and will be delivered next week. [Did I get all that right? I hope so...]﻿"

"I like the fact that they are giving a $100 credit for some droid users that are unable to upgrade. Taking care of the customers is priority number one! ﻿"

"Looks like they have a Razr HD MAXX with 32 hours of battery life. Sweet!﻿"

"Don't look like anything worth me trading in my nexus for﻿"

"Bummer it has the same screen resolution the razer has:/ I've had a razr and i wasn't impressed, but in Motorola defense I came from an iPhone 4;) so it my not be legit to compare ;) ﻿"

"The Droid Razr HD has a really great display﻿"