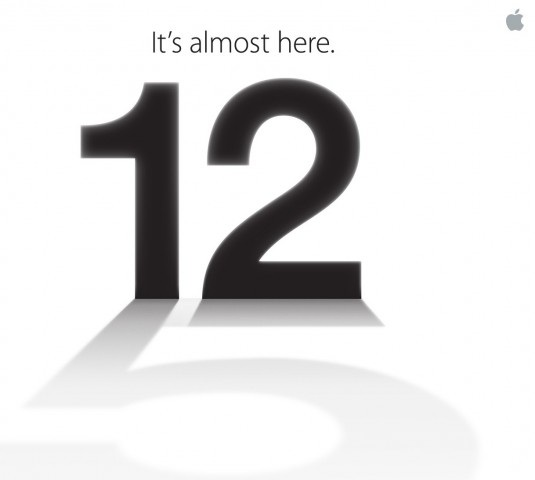 The Loop reports that Apple has just sent out invitations for a media event scheduled for next week Wednesday, September 12. The event will be held at the Yerba Buena Center for the Arts in San Francisco and is scheduled to begin at 10:00 AM Pacific / 1:00 PM Eastern. The tagline on the invitation is simply "It's almost here."

SO it's finally official! Apple will have an event September 12, and as you can see in the shadows of the number 12, it looks like the new iPhone will actually be called iPhone 5. Interesting.

"I really hope the next iPhone has LTE so we can watch Samsung get revenge. Muahahahahaha!﻿"

"I hope it will have LTE, 4-inch (or bigger) screen, more RAM memory and better battery life. That's all it needs. I don't think it needs a faster CPU because iOS is so much easier to run than Android.﻿"

"My AT&T contract expired in June so this is good timing for me to possibly get a new iPhone. I'm hoping for LTE (every cellular provider in the US defines this differently) and larger memory. I don't need a faster CPU in the iPhone but I do want better battery life. I want to dump my Mophie.﻿"

"If this turns out to be almost exactly what the rumors have been reporting...I have to say, I will be disappointed.﻿"

"It's just a phone, what more than a new design and better specs can it have?"

"It's hard to explain really. I don't like the longer design with same width. I also don't like the two-tone that's been reported. Those two issue alone are enough for me at this point. Maybe when it's released I'll change my mind. Perhaps SEEING it for real will allow me to have a better feel for it, but right now, just doesn't do it for me. And yes, I know, these are rumors and such, but just simply saying...﻿"

"Sure hope it's called the new iPhone! I don't like "iPhone 5" it tastes funny ;)
And if it has LTE I'm not sure where gonna love the battery life :/
And in Sweden "or Europe in general we won't be so much "helped" by LTE because if I'm not mistaken, we run our cellular signal on different hertz, so we won't be able to use it any way:/

And the LTE network in Sweden ain't that good, there's not that many phones that run LTE so our telecom companies haven't put much effort in to it " yet".
* hopefully they get to doing that pretty soon*

So for me it's more about the screen and battery life, and hopefully some kind of new tweaks in iOS 6, haven't been impressed by the betas yet, except for the turn by turn in maps ;)"

"I hope I can buy a new iMac. My 4S is only a few months old, I don't see myself buying the next iPhone on launch day. I don't like the 2-tone rumor either, I hope it is false. I will probably buy it just not the first couple of months.

And to that first troll about the LTE..

Yeah, Apple has already thought that out. Why they just bought 318 LTE patents. LOL. So much for anti-Apple cry babies! ﻿"

"I'd have much rather seen the iPhone grow in length AND width, instead of just length as all the rumors suggest. And the two tone just looks bad from the mockups...but again, all this could be different and not be a big deal when it's a REAL product. So just saying, for now, not too excited....but very interested for sure.﻿"

"I have had my iPhone 4S sim-free for a year now, but I'll probably wait for the 5S.

What do you think?
Tuesday, September 04, 2012
apple event iphone iphone 5