The iPhone 5 beats the competition big time in Benchmarks 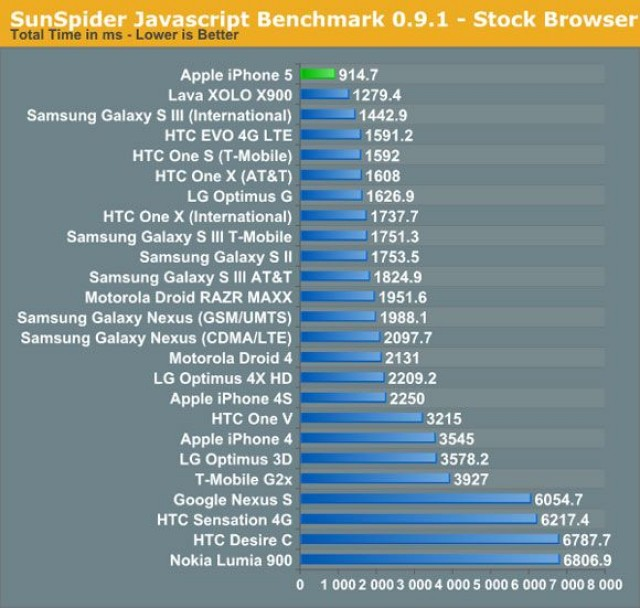 The iPhone 5 beats the whole competition in javascript benchmarks. It’s twice as fast as the iPhone 4S, and significantly faster than high-end Android handsets. Really impressive benchmarks actually, and of course Android users doesn't like that :)

Does it really? I heard someone saying Samsung Galaxy SIII beat iPhone...? ﻿

This proves that specs isn't all. Apple controls both hardware and software to make the best user experience possible. They even made their own system-on-a-chip, the A6 to make that a reality.﻿

That is one of the things people fail to give credit to Apple for. They simply do more with less and that is a good, rather than bad thing.﻿

All ARM processors are "system on a chip"... And they are supplied by #Samsung

Would have been very interesting to see that benchmark using Chrome instead of stock browser on Android. Impressive in any case.

Good arguments for me to ramble when the Android fans start dissing the iPhone :)﻿

Huge difference between just and Arm chip and a designed arm-based system-on-chip. That's why it has the best user experience in the world ﻿

All ARM devices are system-on-a-chip with pretty much the exact same structure as a normal system-on-a-chip. The only thing Apple CAN do is get the software optimized to run smoothly in any situation and in any environment. That is NOT a brand new invented ARM-architecture

The fact is that the iPhone 5 beats the hell of the competition no matter what ;) ﻿

The architecture in the A6 will not be that different to a standard ARM system-on-a-chip. Of course their knowledge about their own hardware and all their investments they've done through the years pays of, there's no denying. The fact still remains - until someone shows me a thorough walkthrough of the changes APPLE has made to create this 'new' architecture I'm a pretty solid believer that it still runs on a standard ARM system-on-a-chip. ﻿

Really impressive benchmarks by the iPhone 5

Looking into the Geekbench figures it really strikes how fast the memory is in the Iphone 5. The CPU seems not to be on par with phones like SGSIII but I'm really really impressed with the memory performance.﻿

Apple made some changes, probably something in between ARM A9/A15 architecture (picks of both). They've come a long way these years. In iPhone 4, they just upped the L2 cache a bit on a "standard" Samsung Hummingbird (if I remember correctly).﻿

Well javascript is a funny metric to measure overall performance in :P It's a very competent processor but from what I've seen it's just about the same or slightly below the competition (like the GSIII). Will be interesting to see how Jelly Bean on Chrome compares!

Either way I agree that it's not all about performance and Apple is good at optimizing visual effects. Only Microsoft beats them there really with WP7/WP8 :)﻿