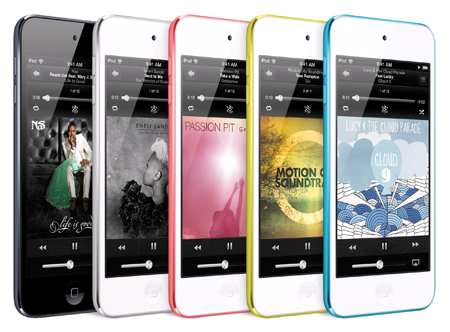 Apple's 5th generation of the iPod Touch got some quite large updates. It now has the same taller 4-inch Retina display as the iPhone 5, and a better 5-megapixels camera with 1080p video recording. I really like that. The camera also has the same panorama camera mode as the iPhone 5.

Siri is now built-in, and it has AirPlay mirroring, Ultrafast Wireless and much more.
The only drawback I can see is the price. It's way to expensive. $299 is the same price as the Google Nexus 7!
Too bad Apple didn't launch a 16GB version, then the price would be lower.

Here is some voices heard about the new iPod Touch:

"I didn't think they could make them any thinner but they have. ﻿"

"incredible thin and still a lot of good specs. To me the 1080p video recording on such neat device is the most interesting :)﻿"

"I'm not sure what the rest thinks, but personally, the colors of the new Pods and Nanos reminds me of Nokia's new phones :P﻿"

"White one reminds me of galaxy s3...
And the others kind of looks like lumias... This will be fun to watch ;)﻿"

"the old nano did too so I think Nokia has been quite "inspired" there ;)﻿"

"look at the old nanos, the Lumia phones looks exactly as them so I think it's the other way round. Nokia is a bit "inspired" by them when they designed the Lumia phones. The nano was first. By far.﻿"

"Love everything about the new iPod Touch, especially the better camera. Just the price is too high: would have like to see a 16gig for $250﻿"

"I have a friend with an android phone who wants access to the apple app store but likes his android as a phone, think that a Touch and a galaxy S3 would be the perfect combo of the best of both worlds for them.﻿"

"still cheaper than what I paid for iPod 32g model when it came. Still disappointed with Australian pricing though it doesn't matter whether the AU$ is higher or lower than the US$ they still ensure that we pay considerably more than the American market.﻿"

"If I needed to upgrade my iPod Touch these would be great (I use mine more as a mini tablet). "