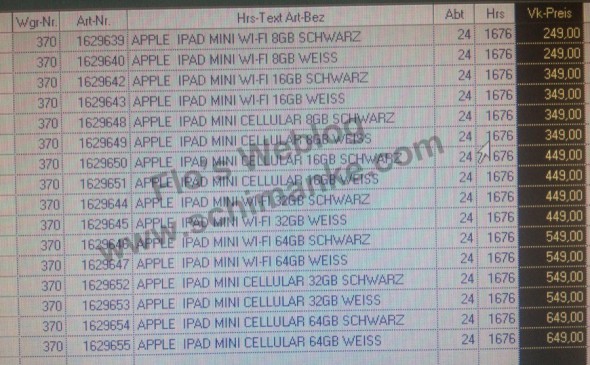 It looks like Media Markt has done a major leak, they have published a list of prices for various iPad Mini versions. If this is true then it looks like the iPad mini will start at 249 euro for the 8 GB WiFi version! 349 euro for the 16GB version. And it looks like their will be 3G versions too. No LTE[1] though. Probably to keep the low prices and to differentiate it from the normal iPad.

With these prices it will direct compete with Google’s Nexus 7 and Amazon’s Kindle HD.

The rumors says that the iPad mini will have a bit bigger screen than the Nexus 7 and a back camera. And it seems that Apple will push it as an consuming device with some new iBooks features.

It will all be clear to us when they present it on the rumored October 23 event.