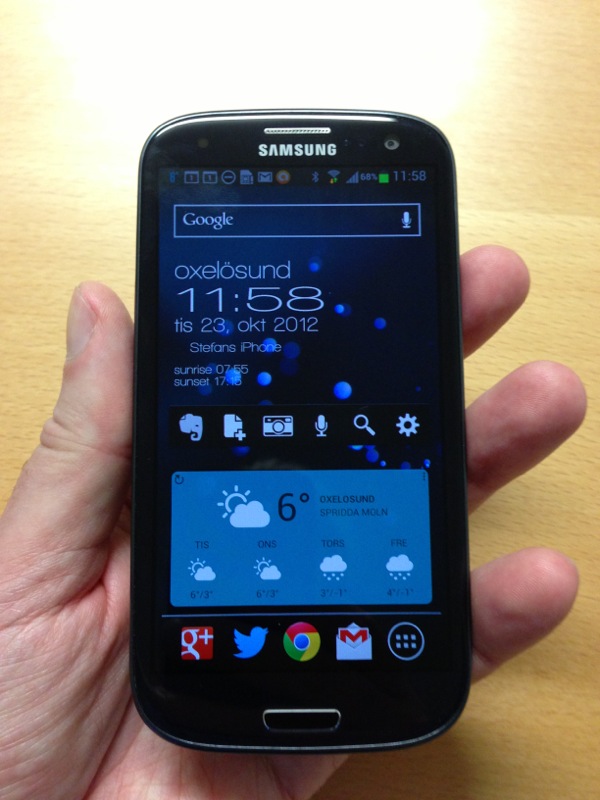 After using the Samsung Galaxy S3 4G for a while now thanks to East Mobile Solutions, it’s time to do a review of it.

It’s actually the first time I’ve used an Android phone, so it has been quite a journey. But a fun and interesting journey!

The huge 4.8-inch screen is awesome to work and read on. The first time I opened Flipboard in full screen mode i actually said wow! out loud. At night I have problems that it’s too bright though, even if I turn the brightness down to the bottom. It doesn’t matter if I use auto light or not, it’s too bright to read on it in total blackness that I always do every night when reading before go to sleep.

The first couple of days I also struggled with typing on it. The keyboard was terrible. Google+ users started suggesting SwiftKey instead of the built in Samsung keyboard, and today I installed it, and oh boy! how much better it was! I can suddenly type as fast as I do on my iPhone 5..

And I also installed Nova Launcher to get it to look as a Nexus phone as much as possible. And after installing that the phone actually feels snappier too!

It’s strange that you have to install and customize a branded phone before it gets useful..

I really like Android[1], it’s fun to use and widgets can be very useful and make you very productive and creative. I have installed a calendar and gmail widget for example, so I can easily see what’s up. I had to switch to my own GTD[2] system based on calendar and Evernote from the great OmniFocus that I used on my iPhone and Mac, and by installing widgets from these to apps makes me feel that I have control over my tasks again. 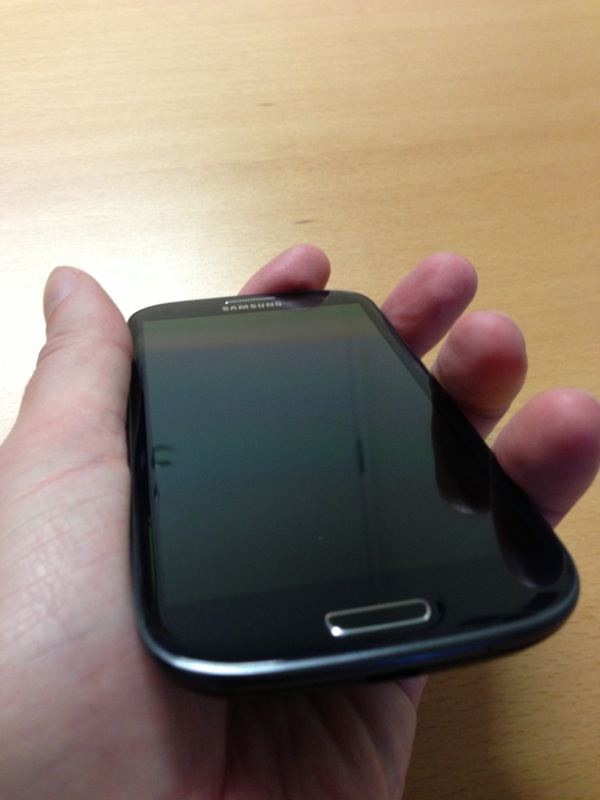 Another thing that worried me was to find a replacement for the excellent RSS[3] reader on iOS[4] called Reeder. But after trying a few in the play store I finally found what I was looking for, Minimal Reader had all that I wanted,  and it looks beautiful too. And the best of all, it has excellent widgets!

Another thing except for widgets that I like with Android, is the share menu that is available in all apps. It makes it so easy to share and send content to different services and apps. It’s good but strangely though, I miss one very important thing from iOS when it comes to this, and that is share the complete text to evernote for example. That is possible in almost all RSS readers and news readers on iOS, but not on Android. That’s to bad because I often store articles in evernote for research when blogging. The share menu only offers sharing of link and title. That’s not enough for me.

Another thing that is really good with Android, is that you can very easy install apps directly from the Google Play Store on the web from your desktop computer. I like that. It feels very futuristic to do that :)

The build quality of this Samsung phone is not good though. It feels and also is very plastic. And both the backside and the front gets scratches very easily. And the ”home” button doesn’t feel so high quality either. It feels a bit sloppy actually. 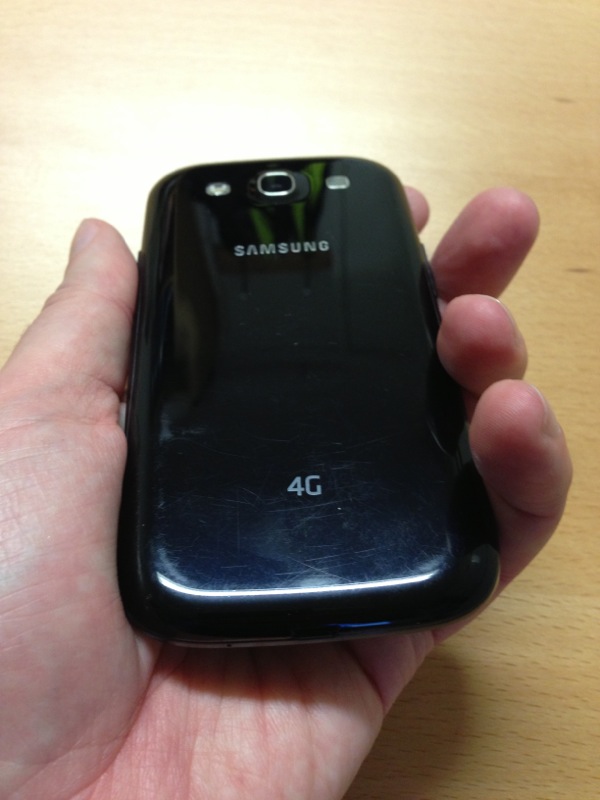 I’ve only had it for a week and it already has a lot of small scratches on the backside, and some strange marks on the front glass that I don’t manage to clean off. As a comparison, I have never had any scratches at all on any of my iPhones. It’s a huge difference in build quality overall.

The battery life surprised me though, it’s very good even with plenty of self updating widgets and apps. It’s better than it is on my iPhone 5. I can quite easily manage a whole workday without charging and that is not possible with the iPhone with hard usage. 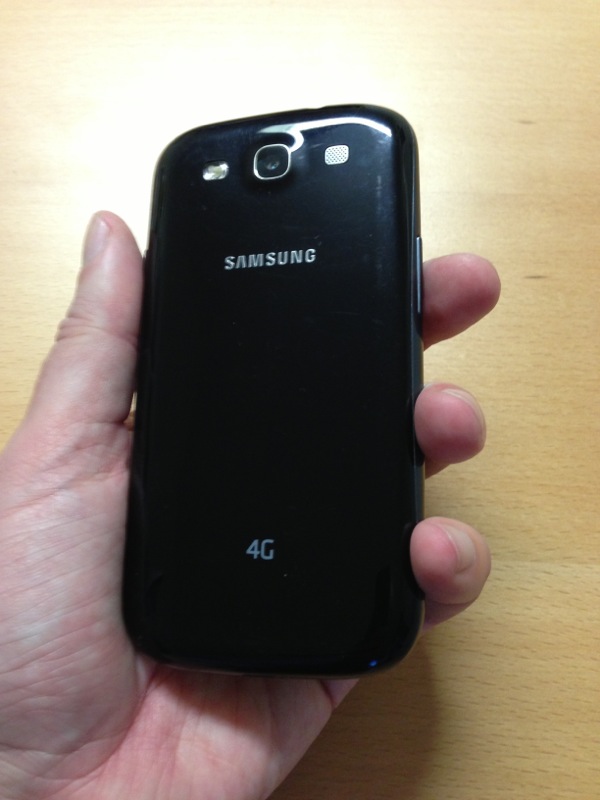 The 8 megapixel[5] camera is fast and good, but I get the feeling that the iPhone 5 camera is a bit better. I haven’t tried video recording yet, because I always use my iPhone 5 for that anyways, but maybe I will do that someday.

I haven’t bought a microSD card yet either, so haven’t tried that slot, but it feels pretty awkward to have to remove the backside of the phone and remove the battery to put a card in. And I actually don’t have a need to expanding the storage. 16GB internal storage seems to be enough for me. I have music, photos and a lot of the files in the Cloud. And I actually got 50GB DropBox storage (for two years) when activating it on the phone. 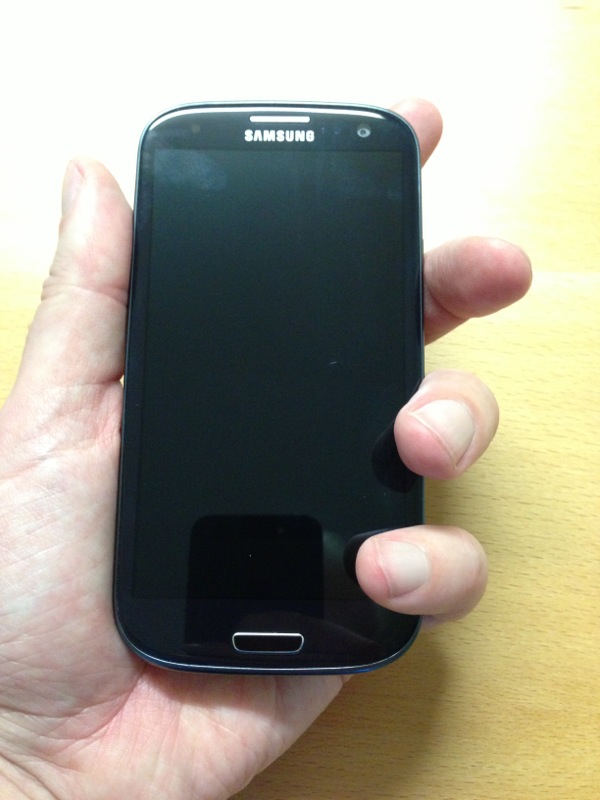 2GB RAM[6] memory that this 4G[7] version has, seems to be quite necessary. The phone seems to always use just above 1GB RAM. And this 2GB RAM makes the phone feel really snappy.

Both Wifi[8]and LTE/4G networks speeds is a lot faster on the Samsung Galaxy S III 4G than on the iPhone 5. 4G speeds I could understand (because Sweden hasn’t built-out the network in the iPhone 5 frequencies yet), but not why it’s faster on wifi? Surfing the web was really fast on this phone. 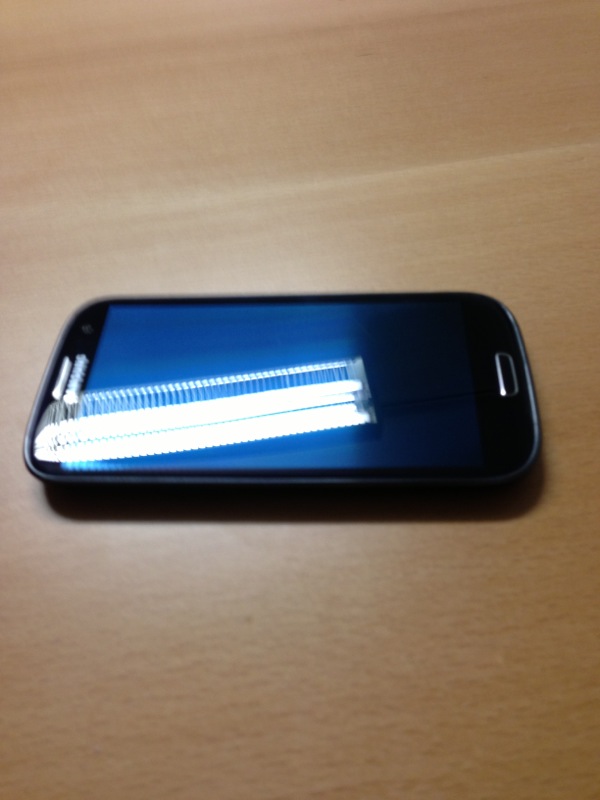 Summarized I really like both the phone and Android OS. It’s fun to use. I like the huge screen, I like the widgets and I like the share menu. But compared to iPhone and iOS it has much worse build-quality and not so good apps.

My Android experience will continue, and I will keep trying to find ways to be as productive and creative as I am on the iPhone 5. Many of the problems is already solved, but I still haven’t found a way to blog as easily on Android, and there is no replacement for TextExpander or ByWord. No Markdown[9] text editor on Android supports Footnotes[10] or has buttons for easy markup for example.

By the way, I have my own Android app now too! Thanks to East Mobile Solutions. Install it from the Play store here.