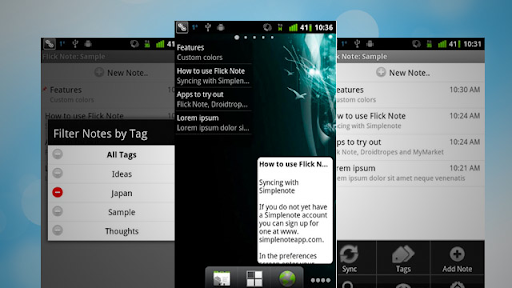 I have done a video on how I blog on my iPhone with MarkDown[1], using ByWord. You can see it below. I think it works great. I did the whole 2000 word long iPhone 5 review in that way.
So my question is, is there any good MarkDown editor available for Android[2]?
It must have Markdown preview and copy HTML[3]﻿. And preferably support MultiMarkDown. I need my Footnotes when blogging.﻿

Jo Anne Thomas
Epistle - IMO﻿
Jonas Petersson
Emacs in a local ConnectBot along with Hackers Keyboard? Nah, I guess that’s a bit too hardcore for most people…﻿
Jason Bayton
I believe all three have HTML output + markdown.﻿
Flick note supports MultiMarkDown. ﻿
George Hall
I hope there’s an Android equivalent of Byword. That app’s great on iOS for markdown.﻿
One with markdown preview and copy to HTML functionality. It’s good to see how the markdown code looks on a web page…and good to have a way to quickly cut-and-paste the final HTML code to a blog. Stefan’s already shown how Byword does these things on iPhone…and having tried it out today, I’m impressed…but sometimes, I only have my Android with me, so an app almost as functional for that OS would be nice.﻿
Will give them a try at some stage. Denote and Epistle look close.﻿
Stefan Svartling
I think Flick Note looks most interesting because it supports MultiMarkDown. But not as beautiful as ByWord though﻿