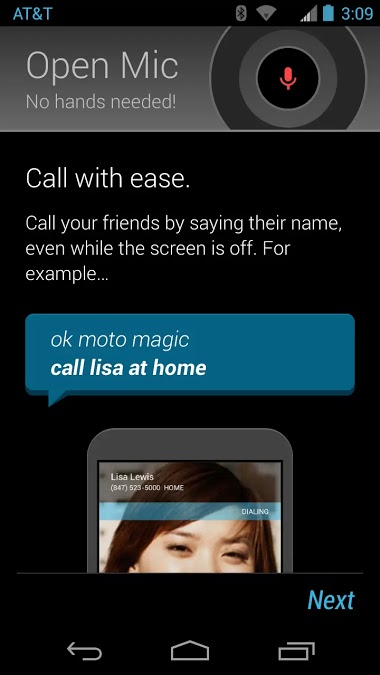 More and more leaks of the Motorola Moto X shows up. Now a video of a new feature called "Open Mic" shows up. I have earlier reported that the Moto X will be always on, always listen, and this open mic feature is part of that. You can give the phone commands all the time, even when the screen is off or from the lock screen. Looks kinda nifty.

Update! Watch a leaked promo video of this feature here!!!

From the look of it, it looks like it's based on Google Now so all the Google Now commands should work. Too bad Google Now doesn't work so good in European languages though… I hope that Google someday could prioritize Google Now and give it more support for international languages.

The Open Mic feature on the Moto X is also more proof that it's based on features instead of specs. It will have a lot of different sensors, gestures and voice commands, and will try to give the user the best user experience he or she can have. That instead of having the latest high end specs. That also means that the phone will not be as expensive either. I think that is a good move by Motorola/Google.

"Called Open Mic, the feature works in tandem with Google Now to perform voice-initiated tasks. Activated either by a custom phrase or the default ‘ok moto magic,’ Open Mic listens for spoken phrases when the Moto X phone’s screen is off. When a command is recognized, the phone is unlocked (unless you have a password or pin) and the content of the command is sent to Google Now, from which point it works as expected"