Some more info and specs of the Samsung Galaxy Note 3 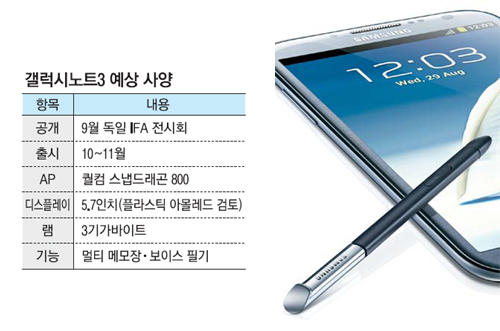 Apparently have the specifications of the coming Samsung Galaxy Note 3 been confirmed by a "source" at Samsung Electronics, but I am still skeptical.

The Galaxy Note 3 will have a Qualcomm Snapdragon 800 (in some places in the world it could have the Exynos 5 OCTA processor), support LTE-A that has twice the speed of LTE, 3GB RAM memory, Android 4.3, and be expected to be unveiled during or around IFA show in Berlin in September. As I've said before.

It will also have a 5.7-inch display instead of the 5.99-inch display I believed it would have, and the reason for that is apparently that Samsung tested the market for bigger sizes with the Galaxy Mega 5.8 and Mega 6.3, and decided to not use such big display on the Note 3. It will have a very thin bezel so it will not be much bigger than the Note 2. It will use a metal band around the device, just as the Galaxy S4 has. So my guess is that the design will be as the S4, just bigger. That's a disappointment to me, Samsung's design starts to be very boring.


Not so much new news there, but there you go.
Friday, July 26, 2013
android galaxy mobile note note 3 phone samsung smartphone