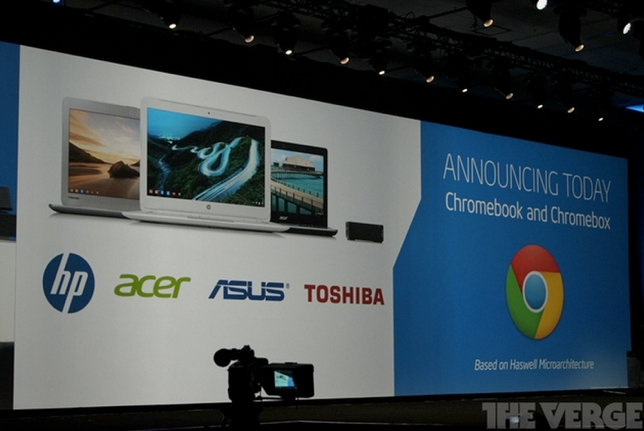 Google has today presented new Intel Haswell-based Chromebooks! That is a quite huge step up from Atom / Arm based Chromebooks. That means better Battery Life and a lot more powerful, let's hope the prices stays low though..


The announcement came on stage at Wednesday's Intel Developer Forum keynote in San Francisco, as Intel VP Doug Fisher and Sundar Pichai, the head of Google's Android and Chrome divisions, showed off the new hardware. Fisher and Pichai revealed two new laptops from existing Chrome hardware partners, HP and Acer, and a Chromebook from Toshiba, and a Chromebox from Asus. These devices mark Asus and Toshiba's first foray into Chrome OS hardware. Fisher promised battery life improvements of up to 15 percent and performance jumps of as much as 50 percent for Haswell Chrome devices over their Atom-based predecessors