I got a new feature on YouTube called "Fans" 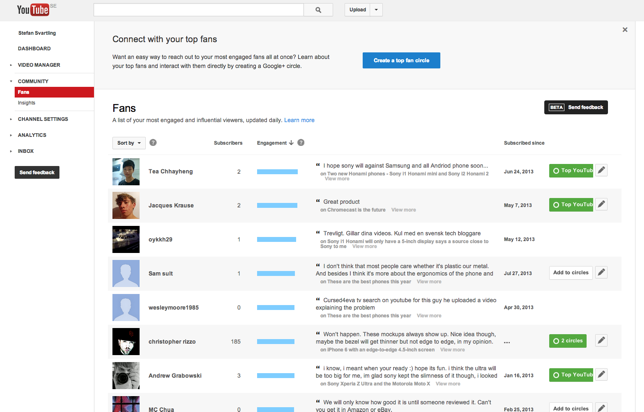 This is pretty cool, I just got a new feature on YouTube that is called "Fans", it's a list of some of my engaged "fans". For each person on the list, I can see how many subscribers they have, how engaged they are with my channel, a comment they has made on one of my videos, and how long they have subscribed to my YouTube channel. That is pretty useful for a YouTuber like me. I can also add these "fans" to a Google+ circle if I want, I can share a video directly to them. Of course that is not possible to do with fans that haven’t yet connected their accounts to Google+. So hopefully this will make more people connecting Google+ to their YouTube account. As I said before, I really hope Google / YouTube connects Google+ comments to YouTube. That will make even more users connect Google+ to YouTube, because otherwise they can't comment and interact. It will remove most of the trolls and make the discussions better.


The Fans page shows a list of some of your most engaged and most influential fans, based on their public interaction with your YouTube channel. By default, the list is sorted by a combination of subscriber count and engagement level, but you can also sort by either factor on its own.

Note: This page only appears if your channel has a large enough number of subscribers.