Apple said that the battery had increased in both of the new iPhones, iPhone 5S and 5C, but maybe you wonder how big the battery really is? Well the iPhone 5S only has a 1570mAh battery. That is kinda tiny if you compare the battery to for example Sony Xperia Z1 ’ s battery that is 3000mAh. But you can’t really compare them like that, the iPhone and iOS doesn’t use as much power as Android does, and iOS is highly optimized for the hardware. 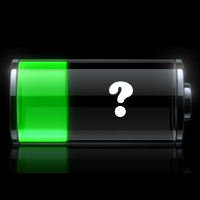