This is how much Samsung dominates Android (unfortunately)

According to the latest data from Localytics, Samsung now account for 63.3% of all Android devices in the entire world (unfortunately). That is an incredible Android domination. All other major Android manufacturers are far below 10% even, like HTC (6.5%), LG (5.9%), Sony (5.6%) and Motorola (5%). 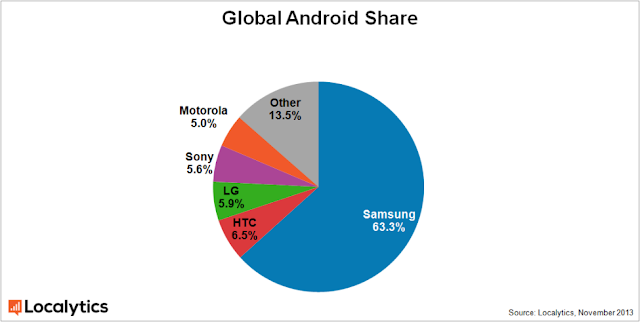 I think this is bad for Android and Google, because Samsung is making Android to their own OS, by changing it to their likings, adding a lot of bloat and strange features. It’s almost not Android anymore, and what will happen if Samsung suddenly switch to Tizen OS? There will not be much left after Samsung, and will developers keep developing for Android then? Or will they go over to Tizen?

Samsung is so dominant that the normal user thinks that the Samsung bloat is what Android is like (no wonder that so many still buys the iPhone then), Samsung destroying Android (not helping it) by dominating the market. That’s my opinion at least.