Wow! The Chrome app StackEdit has been updated - now much better! I can almost use a Chromebook for my blogging now

As you may know, I really love writing in Plain Text and in the simple markup language for writers called Markdown[1]. I use a lot of excellent Mac apps for that, like nvALT, ByWord and IA Writer for example. I did an experiment a while ago, where I tried to use the Chrome web browser as Chrome OS on my Mac, by only using Chrome and Chrome apps, and it went very well. In fact you can do that to 100% if you are happy with just using ChromeOS and Chromebooks.

I already found the excellent Markdown text editor for Chrome - StackEdit back then, but today when I tried it again, I got an update automatically when I launched the app. And ohboy! How good it looks now, and how much better features it has now! I really like it. 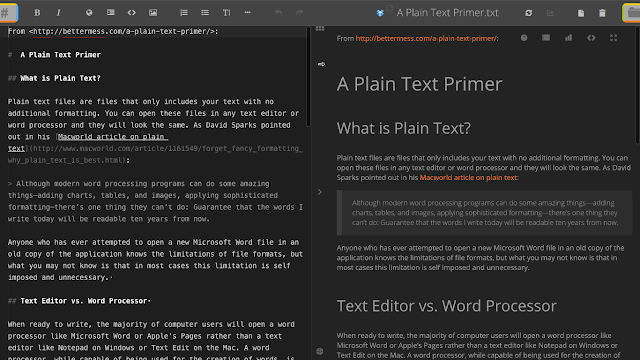 In fact, I could in reality use a Chromebook instead of my beloved 11-inch MacBook Air now, if it wasn’t for that I need my TextExpander to be productive… That app will never be available for Chrome or Chromebooks, and I don’t think an app that has almost the same features does exist for Chrome either, and probably never will.

TextExpander has made my 11-inch MacBook Air to a highly productive blogmachine, by letting me just type a few characters to paste in markdown snippets prepared on what I have in the clipboard for example. For example adding an image with all the formatting already there. The image of StackEdit in this article is added by just typing “.image” (without the"“). Very simple and fast. Same with my footnotes, for example the Markdown footnote you see in this post. I just typed ”.fmark" to add that. You can do really advanced Textexpander commands, real programming really. I use it to add images, links, footnotes and more, fast and easy.

Other stuff I miss is automated spelling corrections while typing, easier syncing with Dropbox, working focus mode and more.

That’s too bad, because I like the idea of Chromebooks (they are so cheap), but as long as I can’t be as productive as I am on my Mac, there is no point in using them for me. I will look into how to make Macros in StackEdit though, because it supports Macros. I hope I can use them for some of the stuff I do with TextExpander.

Find it in the Chrome App Store here.