But here’s the really big deal — it can enable two users to chat not only without an Internet connection, but also when they far beyond WiFi and Bluetooth range from each other — connected with a chain of peer-to-peer users between you and the far-away Internet connection.

It’s called wireless mesh networking. And Apple has mainstreamed it in iOS 7. It’s going to change everything.

And Apple has built in support for this feature already into iOS 7. It’s the first major mainstream implementation of wireless mesh networking. It's incredible useful. I have used AirDrop (it's uses the same technique), and it's so easy to send any file to another user or device. And very, very fast too. You don't need to be connected to any wifi network (but you need to have both wifi and Bluetooth activated), because it creates it's own Adhoc network and uses Bluetooth for identity and wifi for the fast transfer. It doesn't use any data from your mobile data plan, and you can use it anywhere.

FireChat isn’t just an anonymous chat app. It lets you communicate without a network connection. It uses Apple’s new multipeer connectivity framework in iOS7 allowing iOS devices to establish direct connections over Bluetooth and Wi-Fi without an internet connection acting as intermediary. Open Garden has further applied its multi-hop mesh technology to the app, which lets devices form long connectivity chains. There’s really no geographic limit to how big the ad hoc chat network can grow if there are enough active FireChat devices to fill in the gaps. 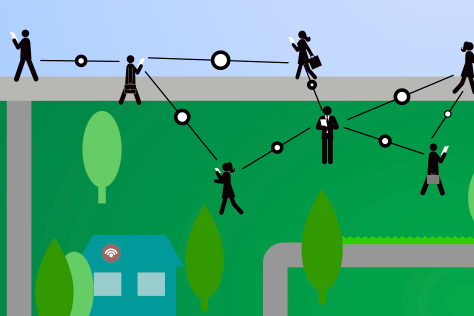