iPhone 6 to be 0.22inches thin and features A8 processor at 2.6GHz <-- to me that means bigger phone and the name iPhone Air

Rumor: The expectations of the upcoming iPhone 6 are very high, and according to a recent leak from Sonny Dickson the specs of the iPhone 6 might just meet those expectations as a recent tweet from Sonny claims the iPhone 6 will indeed feature an A8 processor at 2.6GHz, ultra-retina screen with 389ppi and be just 0.22inches thin in comparison to the current iPhone 5S which is 0.30inches.

Sonny Dickson was a great source when it came to the iPhone 5S leaks last year, so these rumored specs could be the real deal. Personally I think it's a bit early for such info though. I don't believe Apple has decided on the final specs yet.

And if the iPhone 6 will be as thin as in these rumored specs, then it needs to be bigger to have a big enough battery. The thinness could mean that the name could be iPhone Air though. I think the iPhone will be very exciting this year! 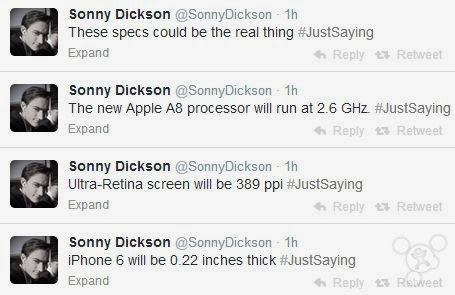