Latest Twitterrific uses the possibility to delete your own tweets to fake an Edit button that, to the end user that doesn’t know about Twitter’s stance on the matter, looks like a real editing functionality. The way the Edit button in Twitterrific works is, indeed, smart: once you’ve tweeted a message, an Edit Tweet button gets added to the tweet’s contextual menu; tap it, and the Compose screen will come up again, containing the text of the original tweet that you can edit. Twitterrific, however, isn’t actually editing the tweet: after tapping the Edit button, the original tweet gets deleted from Twitter and its contents are inserted in the screen to compose a new tweet. This gives the illusion that the original tweet is being edited, while Twitterrific is only deleting and creating tweets as allowed by the Twitter API.

Really clever solution by IconFactory. Twitterrific is my favorite Twitter app for iOS. This “edit tweet” feature makes it even more outstanding. 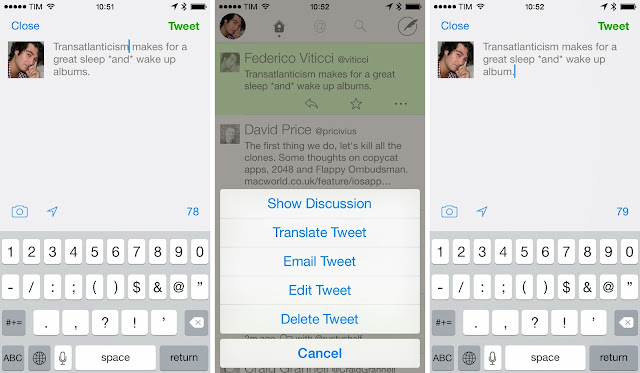