iOS 8 is likely to supercharge the functionality of Apple’s iPad with a new split-screen multitasking feature, according to sources with knowledge of the enhancement in development. These people say that the feature will allow iPad users to run and interact with two iPad applications at once. Up until now, each iPad application either developed by Apple or available on the App Store is only usable individually in a full-screen view.

This could actually be true, and if so, I also believe in the rumor that Apple will release a larger iPad Pro. It makes sense. Personally I will probably not use this new split-screen feature much, at least not if Apple won't make it very innovative in some ways, so that it's not “just two Apps opened at the side of each other”. Because then I don't think it's so useful. I even have one app at a time in full screen mode and swipe between them on my Mac, and I do exactly the same on my iPad today. It's very easy and effective to just swipe left/right between opened Apps, or swipe up to quickly switch to the app you want if you have a lot of Apps opened.

But I guess if Apple will do this new split-screen feature for iPad, it really will be in a very innovative way. Hopefully so that the Apps is connected to each other and share content between each other.

And I have a hard time seeing this working on the iPad mini, it's too small for that, but we will see what Apple comes up with. It's not so many weeks left now until WWDC 2014. 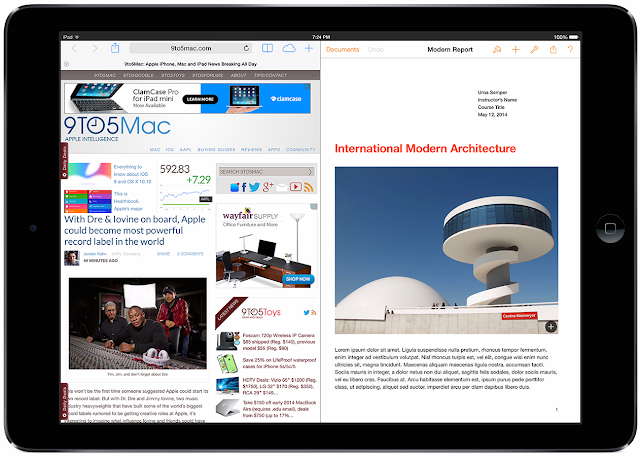