Keep in mind however that unlike with the @1x -> @2x transition we had in 2010, this time we’d only have a 50% enlargement rather than 100%. The thing is, a 50% enlargement with interpolation doesn’t look worse than a 100% enlargement with pixel-doubling, despite the loss of details due to the interpolation. As you can see, older non-@3x-optimized apps would actually look better on an @3x iPhone than non-@2x-opitmized apps did on an @2x iPhone. Add to this the fact that the screen's pixel density would be higher this time around, and the perceived image quality difference would be even smaller.

This is interesting. It means that if the iPhone 6 / iPhone Air will get a new screen resolution of 1704 x 960 pixels, the existing Apps will still look very good anyways, so the developers doesn't need to have all their Apps updated at launch. They will be good enough until they get updated, but they will of course look gorgeous when they are updated.

It was much worse the first time Apple changed the resolution. That time the Apps looked really terrible. Fortunately they were updated really fast. And they probably will this time too, because the iOS developers are very devoted to the iOS platform. 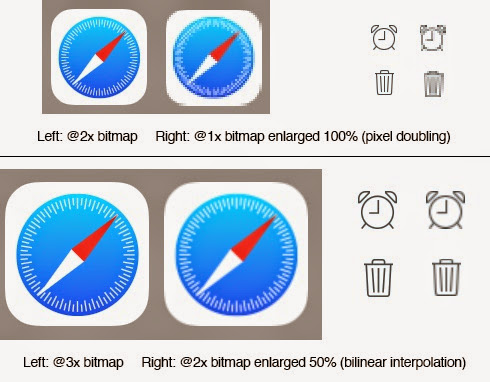