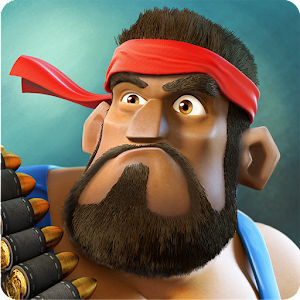 When Developer "SuperCell" launched Clash of Clans, it became wildly popular and soon everyone was playing it. To try and repeat the phenominal success it has recently launched Boom Beach. It has been on iOS but it hit the Play Store only a few days ago so I have been playing it. So is it better than Clash of Clans?

In Boom Beach you try and beat the evil "Blackguard" that has captured the villagers by using troops to combat against them and thus capture the island.

The game’s base-building mechanic has you developing a range of military and infrastructure upgrades to support your efforts. You can also speed up constructions  with "gems" like you can with Clash of Clans. You can purchase more Gems as an IAP (In App Purchase).

You can also attack other people's islands that are playing. These can either be random or your friends if you use Facebook sign in. But beware, if you are offline then other people can also attack your island and steal your gold and wood (required to build things). This is probably to try and get you to play the game more and more.

So overall? Like its smash hit predecessor, Boom Beach is a very addictive free to play game (as long as you don't mind waiting), but as you progress through the game you may find the temptation to spend your real money on in app purchases. However all in all, I find that this game is much better to play than Clash of Clans  to play because I like the fighting better and the scenarios better as well. Also, because I only started playing Clash of Clans a week ago, it is very difficult to play against such pro's with an almost impenetrable fortress.

Pros
+ Immersive Mode support for Android devices 4.4+
+ Beautiful cartoonish graphics
+ No options to add friends from Google+ (only Facebook) although you sign in into Google Play Games at the beginning.
+ No ads (despite being free)

You can pick up the iOS version here and the Android version here
Monday, June 30, 2014
android game ios