Mesh Networks could help with Internet capacity and demand 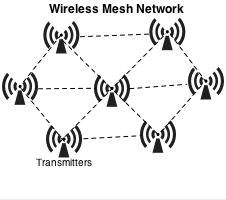 “This software is already here. You may get it from an app developer, an operator or the manufacturer of your device. As this happens, operators can offload huge amounts of data traffic through the least expensive and most efficient off-ramps allowing them to satisfy the demand while realizing the ROI on their heavy investments. Device manufacturers and app developers can solve network discontinuity issues. End-users get better, faster and more reliable internet access. Everyone benefits from more reliable and faster connectivity. It is a win-win-win.”

Exactly. As I've written before, Apple has built in Mesh Network support in iOS 7, and I really hope that we will see some use of it in the future. Services like Apples AirDrop is using it already and actually already helps the internet capacity. I use AirDrop a lot when transfer large recorded video files from my iPhone to my iPad for example, or family photos to my wife's iPhone.

I had hoped for mesh network support in iMessage too so that all iOS users could be “antennas” to each other when sending messages. That would have been cool but it doesn't seem that we will see that in iOS 8. Maybe next time?