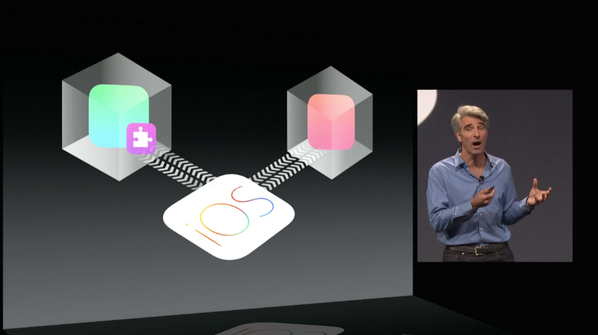 It’s still pretty difficult for a college student to get by using an iPad as a primary computer. Upcoming changes to iOS 8, however, could lighten the load.

I've been using an iPad Air exclusively instead of a computer for over 6 months now and I can't see any problems at all to not replace a laptop with it. The article I link to above contains quite a few things that I don't agree with it. For example citation and research is very easy to do in Apps like Editorial. You don't have to use a rich text format editor like Word, Pages or Google Docs to create a Word document. It's both better and easier to create those documents in a Markdown text editor and then export it as a word document when finished. Plain text that Markdown uses is universal and is much easier to share between Apps and devices.

So creating such documents on an iPad is no problem at all really. And for note taking I think the app Drafts is the best you can use thanks to URL schemes support so that you can share content, snippets of text and complete research between Apps easily. I use Drafts on all my meetings at work for example, and every small note I create instantly is sent to one Evernote document directly from Drafts, so when I get back to my office after the meeting all my notes is collected nicely in timely order in one big Evernote document for every meeting.

To me the iPad is limitless. Only your imagination is the limit. There is advanced, professional Apps for almost anything available in the App Store.

But of course will the new iOS 8 extensions help with even more advanced and better Apps. So it will make it easier also for more users to drop their laptops for an iPad instead. Personally I don't miss a computer at all.