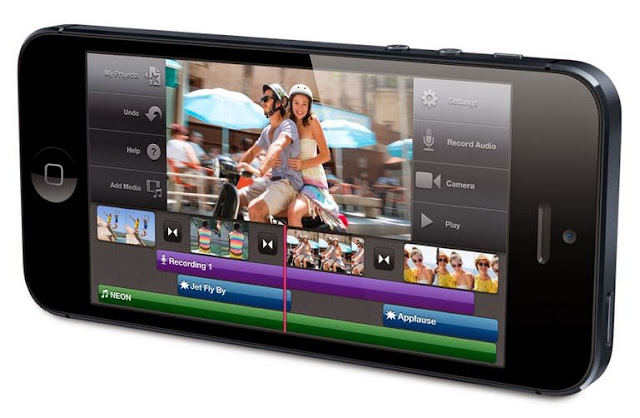 The Android fanboys is always commenting on my Apple posts about how tiny the iPhone is and how huge their android devices are. Over and over again.

But what do they use their huge phones for then? Fiddling with theming and customizations all day, and watching videos and play games. Wouldn't it be better to create content and not only consume it on those huge screens? Unfortunately they can't because they don't have the Apps needed for it… And no I'm not talking about creating a document in Google Drive… Such simple task any smartphone can do.

I'm talking about real content creation here. Like video editing, music making and advanced automated blogging. It's simply not possible on their huge Android devices. There is no professional Apps developed for it and probably never will because Android users are not willing to pay for such advanced and professional Apps.

I have used android for over a year as a quest to find apps that can do the same as on iOS but there simply is no one available. For example for video editing. Nothing beats Avid studio, Pinnacle studio or iMovie for that. These apps has made me replaced my computer for the iPad. The video editing apps for android is a joke. Pure crap and just toy apps. No professional at all. And the same goes for music making Apps, only amateur developed Apps available. Toy Apps.

And the app Editorial for iOS, where you can make automated workflows through python scripts that makes it possible to just type and the workflows formats the post for you automatically with content, links and formatting. For example if I type the word “android”, Editorial automatically link that word to my android page, or if I mention an app that are available in Google play store or apple AppStore, it links automatically to that app. Or if I want to add a left aligned logo of a company I can just type “leftapple”, and editorial gets my stored apple logo image from my blog and left aligned it in the text. There is no limitation what Editorial can do. And there is nothing like it on android. In fact, even not on any computer. Editorial alone is worth buying an iPad for. So once again. You are wrong, and I know what I am talking about. I have done hundreds of posts about my android journey, my quest to find solutions like this. There isn't any.﻿ and by the way, Swiftkey are available for iOS, but it isn't needed because the iOS keyboard is better, with shortcut syncing with all my devices, even my macs. So I can create advanced shortcuts on my Mac and they immediately shows up on my iOS devices. And the iOS keyboard learns, predicts and auto corrects incredibly good. That is something that not many knows. Just keep typing and the keyboard corrects even up to 4 words in a row! Really amazing. I thought that I would miss Swiftkey or Swype, but I don't.﻿

So the iPhone is a much, much better phone to have if you want to create content like me. The Apps makes it possible. That's why I switched back to iOS.