iOS 7 adoption rate is at incredible 90% after 10 months! One of the biggest benefits by using iOS 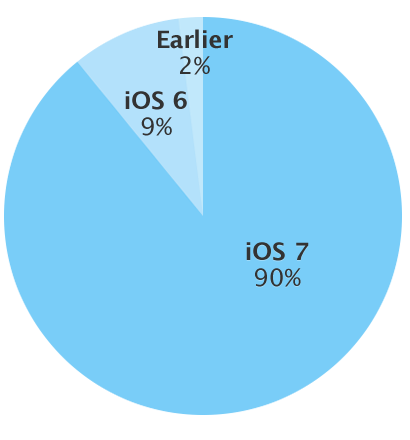 Apple's iOS 7 adoption rate continues to grow, even as the release of iOS 8 approaches. As of yesterday, 90 percent of devices connected to the App Store are running iOS 7, according to new numbers posted on Apple's App Store developer support page.

I think this is one of the biggest benefits with using iOS. Immediately get iOS updates Over The Air (OTA). This is an amazing number and has huge benefits for both developers and the users. That's why iOS can get so great Apps for example. And iOS has such a great backward compatibility too, you can install the latest iOS version on a 4 year old phone for example. And you get it immediately over the air! That's amazing.