iPad art and other content creation is not a passing fad. It gets bigger and bigger 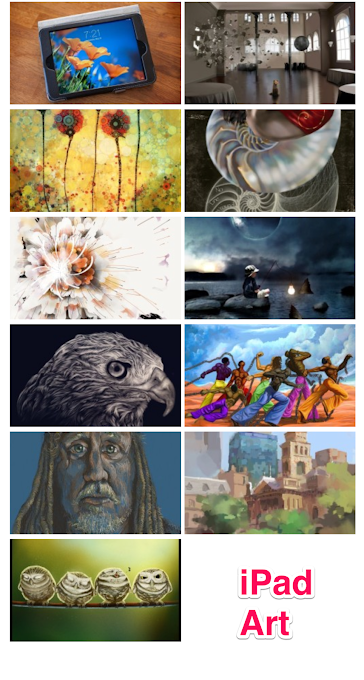 Apps are a fundamental part of art-making on the iPad and Vishwakarma says popular ones like SketchBook Pro, ArtRage and Procreate make up the brushes and turpentine of the digital art set. Judges also noticed a few artists working outside the box.

The iPad makes it possible to be creative thanks to all the professional and great Apps that is available in the App Store.

Vishwakarma is an iPad art advocate whose work has been featured at the first Mobile Art Festival in Los Angeles, Apple stores and Macworld. He also teaches free workshops to promote iPad art and animation to kids, teens and adults. His next workshop is July 30 at the Apple Store in downtown San Francisco.

Personally I'm a iPad content creation advocate too. Not only art is possible todo on the iPad.

“I am really inspired by all the creativity around iPad,” he says, noting that this year’s MDAC Summit offers sessions on iPad animation, 3-D sculpting and printing, illustration and ebook creation. “It’s a powerful tool for creation.

And the best thing is that it's both fun and easy to do. No hassle at all with the right Apps. As you may know by now, the iPad is my main environment now and I haven't used a computer for 7 months. No need for it. It's all the professional Apps that makes everything possible. Hardware and specs isn't the most important, the app Eco system and the developers is. And nothing beats the iPad when it comes to that.