Apple's own ARM chips cause huge problems for Intel, Qualcomm, Samsung and Nvidia

As I've said before, Apple has chosen to go with ARM chips instead of Intel, and I'm sure that Apple has big plans for their own custom build ARM chips. We will see more high end devices running on them. Hybrid iPad/ MacBooks is just the first step that I believe we will see really soon.

Remember that the A8X chip that the new iPad Air 2 is using, is already as fast as a 2011 MacBook Air. That is how fast the development of Apple's custom designed ARM chips is going.

And another thing that goes fast is the development of professional iOS apps that is as good or better than desktop software. So there will be very few reasons for using a desktop computer in a very near future. Personally I'm already living in the post-pc era, and has done that for 10 months now with no looking back.

I'm sure we will see a near future with very powerful ARM-based Apple devices, running iOS with professional desktop-like Apps. To me we already are there with the new powerful iPad Air 2. I have never used such a powerful mobile device before. It feels both faster and easier to work on than on my 11-inch MacBook Air.

I can only imagine how powerful Apple's next ARM chip, the A9X chip will be, and it feels good to dream about it.

Check out the Apple insider article below, and also my video at the bottom, where I'm talking about hybrid Apple devices.

That means Apple will increasingly hold onto the high end in tablets with few legitimate competitors, while its tablet rivals all fight for scraps at the low end. Vendors who do want to enter the high end tablet space will face chip options limited to Intel's expensive x86 chips or very low end ARM chips aimed at powering phones rather than more sophisticated tablets.

The profits Apple is earning from iPad sales are being aggressively reinvested back into the rapid development of Apple's own A-series chips, which no other vendor has access to. 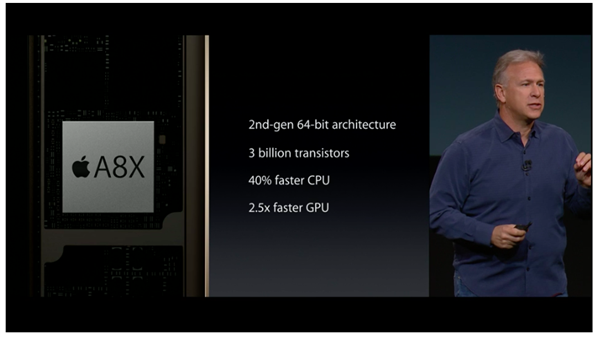 Me talking about ARM-based Macs