Apple has released iOS 8.1.2. Available to install now. I'm doing it on my iPhone 6 at the moment and will on my iPad Air 2 as soon as I've done with this post. As you know I use my iPad instead of computers so I can't update both devices at the same time.

I think its awesome that you can update your iOS devices OTA the exact same minute it's released. That will never happen on android. Anyways, this is a bug fix update with no huge changes. Let's see if third-party keyboards will be more stable. Hopefully.

Apple has released iOS 8.1.2 as an over-the-air software update for iPhone, iPad, and iPod touch users running iOS 8. The latest release contains bug fixes for users as well as a fix for a problem regarding ringtones purchased from Apple being removed from devices. We’ll check out the software release for any significant changes or issues and update accordingly. 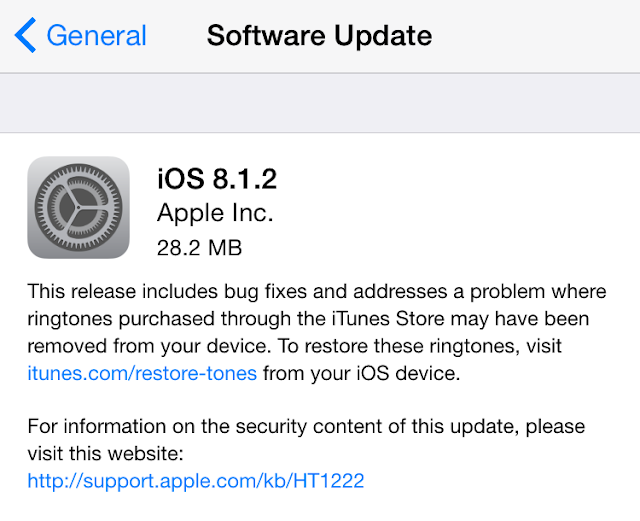 Via: Apple releases iOS 8.1.2 with fixes for bugs including ringtone issues | 9to5Mac

Watch videos from the iOS playlist(sorted from oldest to newest):

My videos about iOS.