Yeah, and the Apps has an incredible quality too. Not only has iOS a lot of Apps developed by large professional companies, it also has a lot of really cool indie developers. None of the competitors app stores comes near the high quality of Apple's App Store. In fact, some Apps is even better than desktop Apps. And some Apps doesn't even have an equal desktop version.

So if you want to earn some revenue for your Apps, start developing for iOS. 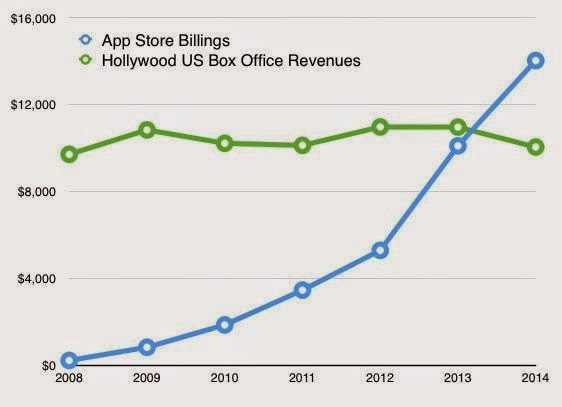 Apple paid out approximately $25 billion total to developers, which means that not only is the App industry healthier than Hollywood, but also on an individual level, some developers are out earning Hollywood stars. The median income for developers is also likely higher than the median income for actors. If you’re looking to strike it rich, forget becoming the next Brad Pitt. Be the next Dong Nguyen.

Via: The App Store makes more money than Hollywood | Cult of Mac

Here is an old video with one of the Apps that beats everything I've seen on desktop computers: