iPhone 6 crushes Samsung Galaxy S6 in game performance and better graphics, even if it soon is one year old

I think it's fascinating to see how much better the iPhone 6 and iPhone 6 plus still is over all high end Android devices, even if it soon is one year old :) The newer and more expensive Samsung Galaxy S6 doesn't have a chance when it comes to gaming performance in GameBench excellent test for example. And no, the reason is not the high resolution screen that the Galaxy S6 has as many Android fans believes. 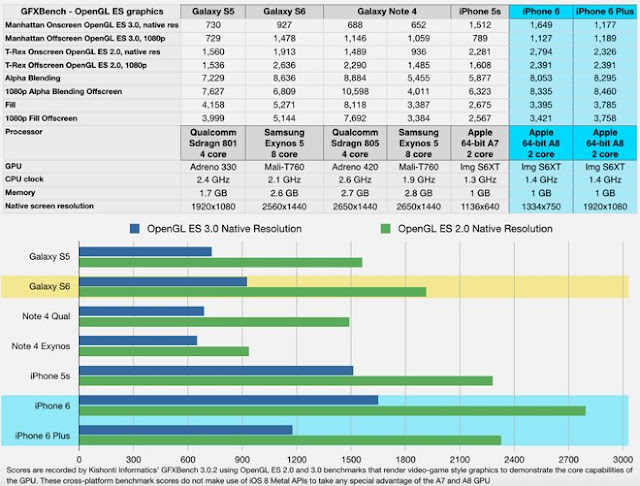 Apple Insider has done a great write-up of this, here is some quotes (with my comments added):

In our own testing, we have consistently found that iOS devices not only outperform their Android counterparts, but do so using less RAM and lower CPU clock rates. Being faster while using less hardware indicates that Apple's iOS software (along with the platform's third party apps) is better optimized, which also helps iOS devices to claim better battery life on smaller, thinner devices.

To get around the engineering flaw of too many pixels and not enough GPU horsepower, many game developers scale down Android graphics to the point where games look no better or sometimes even worse, in addition to being slower overall.

Samsung's poor showing over last year's iPhone 6, despite being newer and packing ostensibly improved hardware (including faster and more RAM), may help to explain why the company is rushing to launch its next Note 5 model in advance of Apple's revamped iPhone 6s and 6s Plus.