In a real usage comparison video1 between the iPhone 6s Plus, Samsung Galaxy S7 Edge, Nexus 6P and the Moto X pure edition, the iPhone totally smokes the competition. Much faster in real life performance. 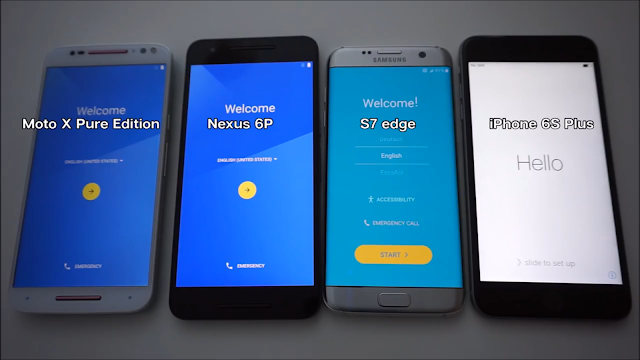 Apple’s iOS-powered iPhone 6s Plus finished two rounds of loading and closing all installed third-party apps – in a total of one minute and forty-two seconds. The Android-powered Galaxy S7 Edge came in second place, pacing eighteen seconds behind the iPhone. The Nexus 6P and Moto X Pure Edition, both running Android, breached the two minute mark with a time of two minutes and two seconds, and two minute and sixteen seconds respectively. The iPhone 6s Plus may ship with the lowest amount of RAM and a lower-spec CPU compared to other handsets in the test, but it’s clear that Apple’s dedication to marrying the hardware and software together in the pursuit of performance is paying off.

And that's exactly what I've been trying to explain many times. Apple optimizes the software for the hardware. Not only for iOS and the iPhone and iPad, but also with OS X and the 12-inch MacBook. That's why it can edit and render 4k video in Final Cut Pro X as fast or even faster than laptops running on Intel Core i7 processors.

Having control over both software and hardware has huge benefits.

Watch this video and see for yourself: