Chromebooks will kill the Android tablet and be way more attractive 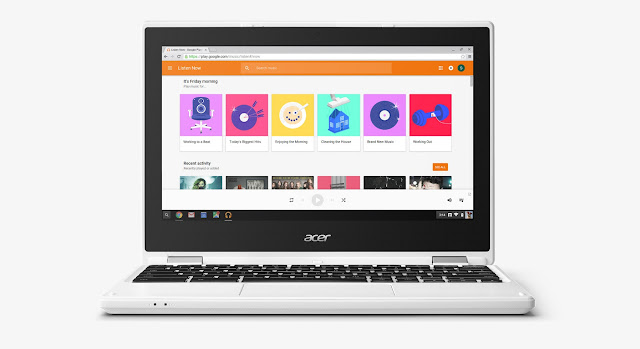 After installing Chrome OS on an old Windows Laptop (Fujitsu Lifebook from 2011), using the CloudReady install from Neverware, and then hunting down the bugs after doing so, my “Chromebook home brew” is starting to be amazing! I really like the minimalistic OS and how fast everything is.

I got interested in trying a Chromebook after watching Google I/O this year, were Google announced that Google Play Store and all the Android apps will come to Chromebooks. I think that is an excellent move by Google. It will make Android apps way more attractive, and hopefully finally make app developers motivated to optimize their Android apps for larger displays…

And I believe that this excellent move by Google will kill the quite useless Android tablets.

If you are at all considering an Android tablet purchase at the moment, feel free to stop. I say that because in a couple of weeks, Android apps and the Google Play store will arrive on select Chromebooks. By the end of the year, those same apps will arrive on dozens and dozens of additional Chromebooks at varying prices and in a variety of forms, some of which can emulate a tablet experience. This major move of Android apps onto Chromebooks from Google has all but eliminated the need for Android tablets to even exist.

There will be no need buying an Android tablet anymore. Chromebooks will do everything that a Tablet can and much more. And do it much better too. You will be able to buy a quite cheap (cheaper than an iPad) Chromebook that is a real laptop running the excellent, safe, fast, minimalistic and beautiful operating system - Chrome OS, where you also can run all the millions of Android apps available in three different window sizes of your choice. And even multitask between them. And they will work with keyboard, mouse, touchpad and even touch. Personally I think that’s amazing and will actually change the laptop computer market shares drastically. It’s something I have waited for Apple to do for a very long time. Adding iOS apps to OS X somehow.

This will be a serious hit to both Microsoft and Apple. If you can buy a Chromebook with great battery life and performance, and with more apps to choose from than Windows devices has, and that is way cheaper than a Macbook, then I can’t see why you shouldn’t consider buying it. I mean, even a hardcore Apple user like me is now considering buying one of these new Chromebooks that will come later this year.

Ps. This article is written and published from my “Chromebook”.

Here is a video where I show how to install Chrome OS on any computer: