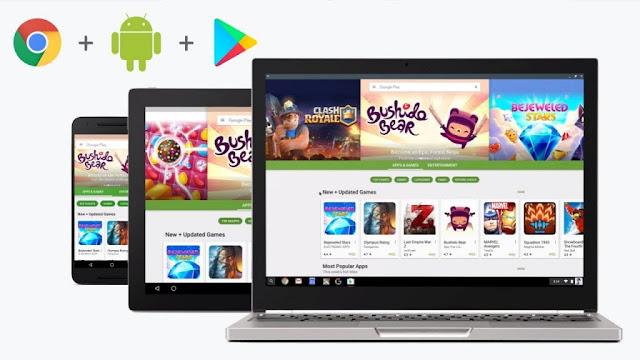 Yesterday Google started to roll out the Google Play Store with over 1 million Android apps for Chromebooks. And this is big. Really big. And a lot more exciting than anything Apple presented on WWDC.

What that means to Chrome OS and Chromebooks is that Google will immediately solve a very serious problem facing both Windows and macOS: Apps. As you must know, Microsoft—to its credit—has been racing to solve this issue across Windows Phone, Windows 8.x, and now Windows 10, but has come up short repeatedly, and the Windows Store is still a wasteland compared to mobile app stores. (To be fair, Apple is even further behind: Macs don’t support touch, and the Mac App Store is terrible too.)

Chromebooks are already selling like hot cakes and this will make them even more popular.

Having a portable and mobile PC that starts really fast, feels snappy all the time, with excellent battery life, very secure, good enough build quality, cheap to buy, and now also with more apps than you can even think of, is an opportunity you can’t miss. I know that I won’t.

For me personally, it will totally kill the need for tablets. The new Chromebook (Chromebook 2.0) is everything a tablet ever was, plus it’s also a very portable and mobile laptop. And you can get it for a lot less money than you can get an iPad. And even if you go for the more high-end Chromebooks, it’s still way cheaper than the iPad Pro with a smart keyboard.

Actually, my Chromebook homebrew made from an old Windows laptop has already replaced my iPad (and Mac), even if it’s clunky, heavy, ugly and plastic. AND without the Google Play Store. And that’s important to say because it means that personally I have already found apps and solutions in the Chrome Web Store that has made me switched. The Android apps will just be a huge app compliment to choose from. It will make the Chromebook experience even better.

“It will change how we are computing”

I am totally sure that my next device will be a Chromebook, but I will wait and see if new models show up this Fall, maybe even with SIM cards so that I can use the Chromebook 100% mobile. As I can with my iPad Air 2. And I think I will choose a model with a touchscreen so that I can use it in new ways I have never done before.

Via Google Demonstrates Why Bringing Android Apps to Chromebook is So Disruptive - Thurrott.com

Here is some videos about my Chromebook experience: