Many has critisized Samsung´s TouchWiz UI and Android software over the years, it has made the mobile devices lag and there has been a lot of bloatware. But the last couple of years Samsung has changed, and these problems are not visible anymore. TouchWiz has slowly gone from something hateful to something lovley. I remember the horrible software on my Samsung Galaxy S3 back in the days. Not only Samsung's fault though, Android itself was quite bad at that time. It's not until after Android 5 it could actually compete with iOS. And now Android is way ahead of iOS. 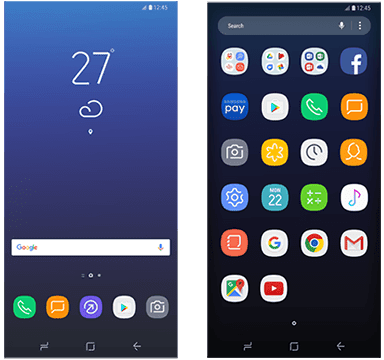 Samsung's version of Android is a pleasant surprise on the Samsung Galaxy S8 and S8+. Personally, I think it's better than stock Android on my Nexus 6P. And I really like that all Samsung apps is stored in one folder out of the box. So no unnecessary clutter of the OS. There is no bloatware anymore. And Samsung's own software is finally useful. Samsung's Internet browser runs smoother and faster than Chrome does in my experience. And supports plugins. And I absolutely love the Always on feature! It actually saves the battery life because I don't have to turn the mobile on all the time to see my notifications. I really love the Samsung software on the Galaxy S8+. The UI is finally beautiful and the apps useful.

It's the small details that Samsung has added to Android that makes the difference. Things like automatically turning off apps that run in the background and haven't been used for a while, to save battery life, and then notify you that it did it is brilliant. Or having a vertical share menu instead of horizontal that makes it much faster than the share menu on stock Android. The horizontal share menu on stock Android makes it embarrassingly slow compared to Samsung's vertical version. Again, a brilliant detail. Also, having a bluelight filter built-in directly into the OS is very useful. There is no need to buy and use a third-party app for that feature, that drains the battery. Samsung's version has all the features you need and works completely automatic in the background with no visual drain on the battery. Also, having a built-in caller identification so that you see if an incoming call is telemarketing or spam is very useful. So easy to see if you should answer the call or not. And then block it. Love it. Another thing that Samsung offers out of the box, is a quite good audio recorder and editor. So no need buying and installing a third-party app for that.

These are just a few examples of small details that makes Samsung's version of Android better than everything else.

Bixby is another chapter, though. To me it is as useful as the Google Now feed is at the moment. A feed you can glance and scroll through to see what's happening and what's up. That's how I use Google Now and that is what I use Bixby for instead now. No huge difference. Personally, I never use voice features or voice commands. So I don't care that Bixby lacks that at the moment. I won't use it anyways. And you can actually remap the Bixby hardware button to be used for any app or feature you want, by installing apps like bxActions.

Optimized software for the hardware is the key to success.
Friday, May 12, 2017