So, I have started using the app Things for my Task Management. I use it as a new kind of Getting Things Done system, by using Inbox, Arias of interest, Upcoming, Anytime and Someday instead of the old way of GTD.

For me Arias of interest can be for example Home, Work, Car, but also Arias like Podcast, Youtube and my Blog. So basically it’s the old GTD @Contexts + topics you are interested in.

Upcoming is all the Tasks (ToDos) that has a date or time when it should be done. Things adds all tasks there automatically as soon as you have chosen a ”When”.

Someday has all the tasks that you eventually will do someday but there is no need in doing them, and there is no hurry. It works exactly as the old Someday/Maybe in GTD. Things doesn’t add any tasks here automatically. This list should be reviewed regularly.

And of course the Things system has an Inbox. Here all the Tasks should be added that you will deal with later on. For example when you are doing a brainstorming and emptying your head down into the system. Or when you are using Siri or email to add your tasks to Things, they get added to the Inbox. The Inbox works the same as in the old GTD system. The Inbox should be handled and emptied everyday.

I really love using Siri to add tasks to the Inbox. Works great both with the Things Siri integration, and by using Apple’s Reminders app that you can make Things import from. And of course Things has Siri Shortcuts integration and an excellent Apple Watch app (that I can’t test because I don’t have an Apple Watch yet).

Also, adding tasks by email works great, but I miss attachments. Only the text from emails gets added to the task. But if you use Apple mail like I do, then you get a link at the bottom of the task that you can click on in Things and the email opens in Apple Mail. Pretty nifty and useful.

I don’t use Projects much, but they works exactly the same as before in the old GTD way, and how they work in Omnifocus. I don’t think projects works so good in Things, and to be honest, you don’t need them anymore. You have Arias of Interests for that, and you can do checklists in any task in Things. But if you need to use Projects you can, and you can even do nifty and beautiful headers to differentiate different tasks in a project. 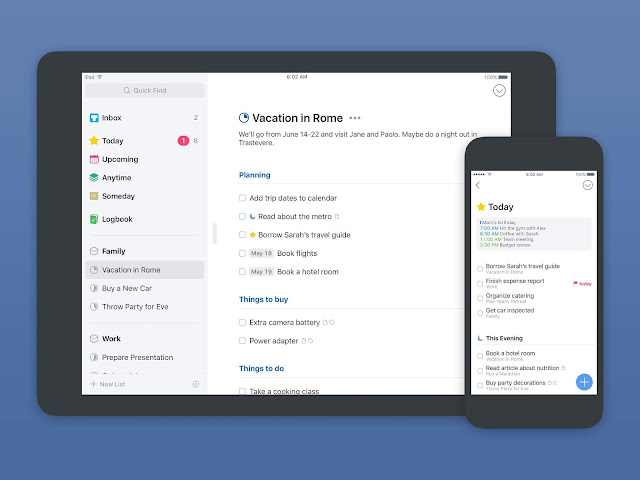 At last I want to say that my first thoughts about Things for iOS was not so good, my first thoughts was ”What have I done?”, ”Why did I switch from Omnifocus to this?”. But now after have started to understand how to use Things, then I must say it’s easier and faster and not so clunky as Omnifocus. And I think I can already trust the system and feel more harmonic in my life. So I don’t regret switching from Omnifocus to Things anymore.

You just have to think differently, and this article was a short try to explain how you should think. I will post more about this and how I use Task Management and GTD.