AirPlay 2 is an audio and video streaming protocol designed to play movies, music, and other content across devices on your local Wi-Fi network. The HomePod supports AirPlay 2, which means you can press play on a playlist on your iPhone and have the music come out of a HomePod speaker.

So now my Sonos Beam, Sonos One and Samsung TV supports AirPlay 2. So no need for the awful Sonos app. I just use which app I ever want to use directly instead. Like Plex, Netflix SVT Play, TV 4 Play, Spotify, InFuse and more. All works great with AirPlay 2. 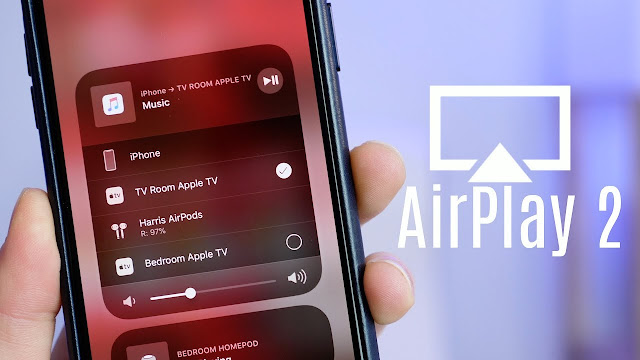 With the roll out of AirPlay 2, Apple has also started licensing the technology to other manufacturers. This means the streaming protocol also works with speakers and television sets not made by Apple—one of the limitations of the original AirPlay. Still, AirPlay2 is an Apple technology, so naturally, devices controlling and sending content to an outlet, must be iPhones, iPads, MacBooks, iMacs, or laptops running iTunes on Windows.

And both my Sonos speakers and my new Samsung TV shows up as different rooms I can stream to. All works great to stream to. All in total sync even if they are from different manufacturers. I really love Apple's AirPlay 2.