If you carries two phones - do this instead!

It’s great if you for example has a personal phone and a work phone, and you don’t like to have to carry both all the time, maybe your work phone runs Android and you hate Android and wish you could use your personal iPhone for everything instead. Or maybe your work iPhone is an old model with a tiny screen and you wished you could use your big new personal iPhone as a work phone too, then do this instead. And you can also use the Apple Watch with both phones! That’s awesome! 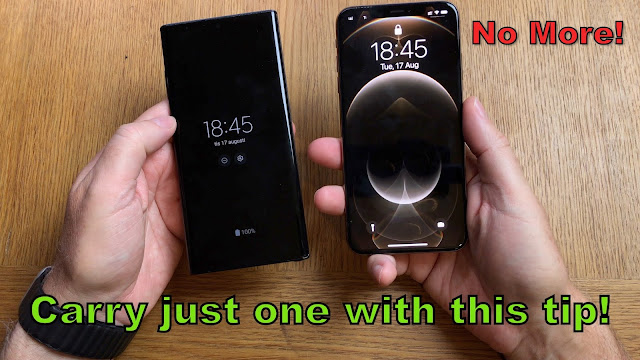 Oh, and it should also work with high end Android phones too, like latest Samsung phones, if you prefer to use an Android phone for both phones instead. But then your Apple Watch won’t work with any of them anymore. But you can of course use a Samsung Galaxy Watch in that case instead. And it will work for both your phones.

On an iPhone it works seamlessly with switching between the two phones. I have for example set it up so that my personal phone is used for cellular data because I have an unlimited mobile data plan for my personal phone. My work phone only has 2GB a month. So that way I can use unlimited mobile data with both phones. You can also set up auto switching cellular data so that it uses both accounts for mobile data if you want. At least on an iPhone. By the way, I have only tested everything I write here on my iPhone, so I can’t know if everything works the same and as seamlessly on an Android phone.

Also, my work phone is setup to be the default voice line so if I hadn’t setup my contact that I want to call to be used with my personal account, then it will suggest that I use my work phone to make the call with. But it’s very easy to switch to the right phone just before you do the call, and as I said you can easily set your contacts to use either work or personal.

iMessage also works with both phone accounts on the same phone seamlessly, so you don’t have to bother with that either. The receiver will not even notice the difference.

I can highly recommend switching your personal SIM card into a virtual e-SIM instead, if you need to carry and use two phones all the time.